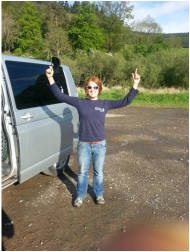 UK Gravity Enduro 2014
Race Report
Day 1: Thursday
I set off early from Galway on the Thursday just before Round 2 of the UK Gravity Enduro and picked up my Kona Ireland teammate, Jonathon Maunsell and Biking.ie's Conor Lavelle, in Dublin. After a quick stop at Bike Addiction, I picked up my Kona Process 153 with newly serviced forks and tubeless tyre's thanks to Dave. The bike felt sweet and was ready to tackle the ferocious mountain stages of the UKGE and the EWS.

﻿Day 2: Friday Practice﻿
After a long night of travelling, I was feeling surprisingly fresh probably due to the anticipation about the day ahead. There was no messing about in the morning and it was straight to Innerleithin for registration and practice. We fit in Stages 1,2,3 & 5, skipping 4 due to tired legs. The stages were so good! Although the transitions were long with plenty of pushing up, I didnt care as the stages were very rewarding of our efforts! Thrilling, fast, technical descents made for a really fun days riding.

Day 3: Saturday Practice & Race Seeding
Up to the trail head early and whacked out stage 4, 1 & 2 again. No time to practice stage 5 which I would later regret. Seeding run after lunch and things didnt go so well. I had a messy run at the top section, then I got caught behind a rider for what felt like a few minutes who would not let me pass and when I eventually did I got a puncture. I was given a re-run so it was up the transition for an hours climbing back to stage 5. I was so fatigued at this point that again I was messy on the top section finding it hard to get flow and finished in a disappointing 6th position.

Day 4: Sunday Race Day
I was happy with my riding today, managed to improve my Stage 5 time to a 4th position and won stage 2. (S1 - 2nd; S2 - 1st; S3 - 3rd; S4 - 2nd; S5 - 3rd). HOWEVER, I got landed with a mahooosive four minute time penalty, along with three other girls, for being a few minutes late to stage 3. This put me in 4th position. I would have had a comfortable 3rd and got to stand on that Podium! : ( Was so gutted but a valuable lesson was learnt.

It was great to have this experience as it set me up well for the EWS the following weekend. Rest day on Monday (with some playtime in Glentress skills park), and we were back on the bikes again Tuesday for some more Innerleithin mayhem!