The Beginning of it All! 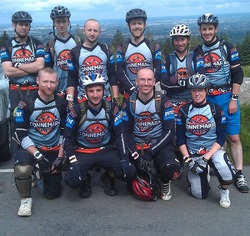 Irish Gravity Enduro 2012, Round 2 - Some Motley crew of goobers!
I took up mountain biking in May 2012, at the ripe old age of 32. It just shows you that you're never too old! Mountain biking was always something that I wanted to try and so I went in search of my local mountain bike club in Galway. I had only ever been on fireroads and some singletrack but always had a desire to discover more off-road biking. After a few spins with the lads from Connemara MTB, I knew it was something that I wanted more of. I got my first taste of 'real' off-road mountain biking when I entered the first ever round of the Irish Gravity Enduro Series in 2012. This was my first ever experience of technical, rooty, steep terrain, you know, on the edge kind of stuff and I LOVED it! I still don’t know how I managed to race on my 100mm travel Giant XTC cross-country race bike! I guess I didn’t know any different! I came third in Sport Women category in this my first ever race and I had officially gotten the bug. This was to be the beginning of my love of racing. With the help of Gary Davoren at MBW bikeshop who sorted me out with a bike that summer, I raced every single round of the series that year and went on to win the overall series of the Sport Category. I also did well in other races like the King of Three Rock and the XC champs. 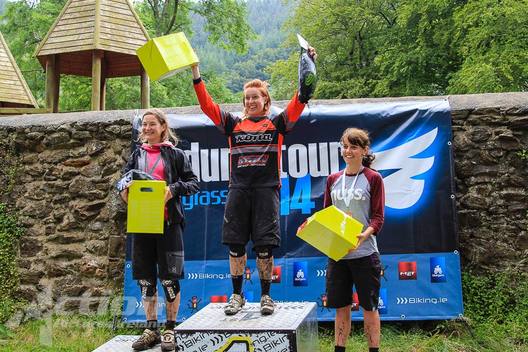 My love of Sport goes back years...
Sport has always been a huge part of my life and from an early age I have always been very dedicated to basketball and dreamed of someday playing for Ireland. A typical tomboy growing up, if I wasn't riding my bike, I was kicking a ball or climbing a tree, never once had I thought about mountain biking, even though I grew up on the foothills of the Dublin mountains! At the age of 10, I took up basketball and played for my local club Meteors, right up to under 18 level. I went on to have success at both university level and division one in the UK, but never really made it to the level I had dreamed about from a young age. At 21, I went to London to train as a Secondary School Physical Education teacher at Brunel University. I spent six years living in West London, where I became very much involved in the Gaelic football scene and played at both Senior and County level, representing the UK at international tournaments as well as getting to All-Ireland semi-finals and quarter-finals. Strict training regimes and constantly having to prove your worth on the team was what we all fought for on a weekly basis. It was here I learned what it was to make sacrifices and how hard work pays off. We trained hard but also knew how to party! As well as Gaelic, I also played soccer for QPR Ladies and rugby for Richmond RFC, two high performing clubs with high caliber players. My time in London was one I’ll never forget.
Over the years, there came a point when I began looking for something different and so I decided to try my hand at adventure racing and triathlons. Although I found them challenging and fun, I missed the comradery and craic that went hand in hand with team sports and so I decided to go back playing basketball and rugby again and joined Blackrock RFC.